I went to the route launch in Ride_in(local coffee, lunch, park and shower spot for riders) in September and already that was great organized. The awesome video of the route made everyone there keen to do it.

The race was organized by Stillwatersports with race director Bobby Behan who is the main man in Specialized South Africa. It was Bobbys and his mates like Gunil de Villiers idea to start a race in Stellenbosch and also to raise money to build more new single track to bring more people to mountain bike there.

Everyone loves riding in Jonkershoek but its not all where we have ridden. 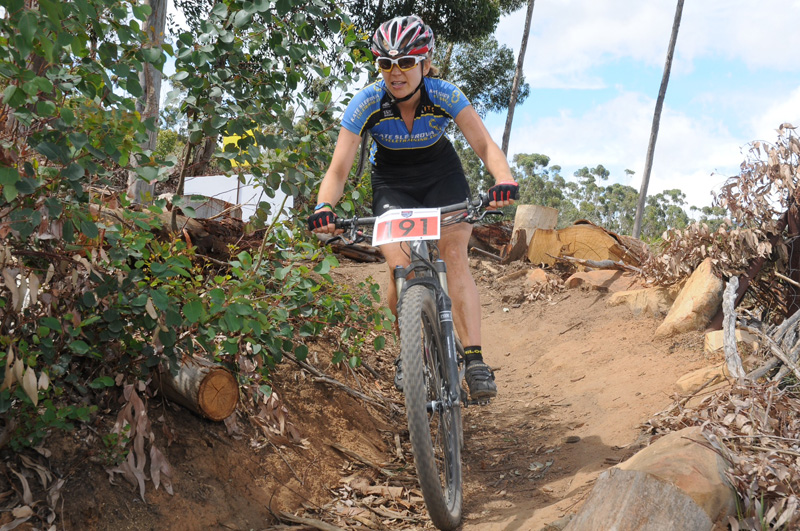 Beautiful Friday morning and there we were 200 people ready to go and have some fun on the trails. Standing on the start we knew it wont be an easy ride with the ascent and the heat predicted.

We started in the centre of the beautiful town and headed into Botmaskop and hit the climbs almost similar route like die Burger MTB. Not for long though and we were on a virgin territory on top of Del Air wine farm and headed for the best part of race for me. Newly built single track up and down with lots of switch backs didn’t give us a second to get bored. This was the highlight of the race for me. Riding through the lush green vineyards and new single track.

After refilling water bottle at second water point the heat kicked in as did the climbing. We were baking on the sun for some time and some swear a bit too. We were thinking this is not an easy ride to finish the long season. But after the gruelling climb we were in Jonkershoek on the home ground for me and in shade. My legs caught second wind or was it the energy gel? and I rode up nicely and enjoyed the known fun single track down. We went flat for a while and headed to the neverending single track that connected on the a new long single track that really felt like its never going to end.

There we were back in the sun and climbing new single track on the right side of Jonkershoek. I pushed hard here as didn’t have any more water left and didn’t want to get a heat stroke. After the climb a reward followed with the smooth switch back single track all the way down to the last water point..

Some people thought we are done now. But not just yet. They had us climb back up above town and then only to the finish.

Great food awaited us in the tent and usual after race chat with everyone. Most people were moaning about the heat and climbing but admitted they loved the down hills.

Lots of pro are in off season so they took it easy which is our normal being race pace But there were still few racing properly.

I had a massage and set up a test bike from Specialized for the next day and then headed to my guest house and for dinner to the lovely town. 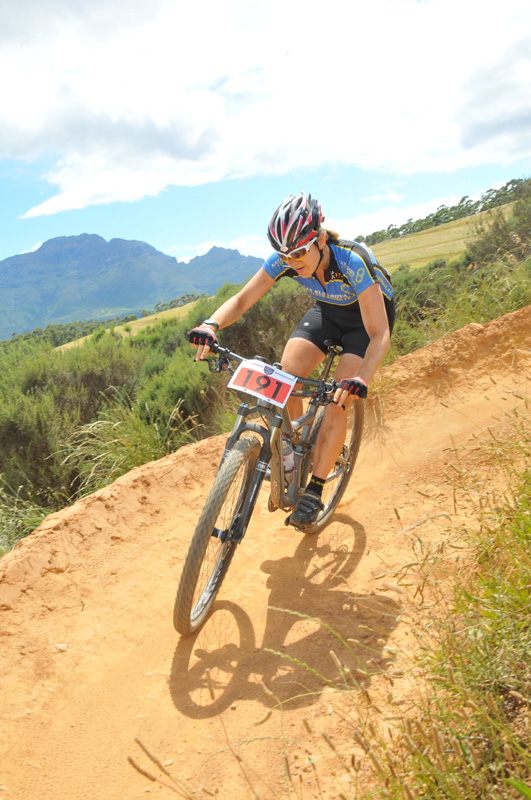 Everyone was bit tired after hard day on Friday. I had taken a chance to test a Specialized bike Rumor Expert, ladies specific bike full suspension. I have always ridden a hard tail so wanted to give it a try. I was a bit disappointed when i found out its aluminium and not a carbon. Hense the weight of the bike was 2,5kg more than mine. Which adds a lot more effort on climbing. However with all the strong ladies like Sharon Louw, Hanli Steyn, Cherise Stander I didn’t have chance for podium so I decided to give it a go.

We left town and went through Kaymandi with Songo and the kids cheering. Which made it feel quite special. On the first climb I knew I am going to regret my decision about the bike as I was not able to keep up with people that I beat the previous day. I am quite competitive nature so I was slightly irritated when people passed me on the up hills where i am usually quite strong. Anyway when we hit Bottlarey single track down hills I had serious fun could feel the advantage of full suspension and it felt like everyone is going so slow…

I can feel why some people never go back to hard tail after trying full suspension. I have ridden Bottlerey before so there weren’t much surprise for me but I still enjoyed the fun route and beautiful views on Table Mountain on one side and Stellenbosch mountains on the other. There are some really great trails there and one can go there on your own so I can definitely recommend that.

Instead of heat we had proper wind making our ride harder on Saturday. As we approached Stellenbosch again I looked forward to the Eden and famous G – spot single track that I am ashamed to say haven’t done until then. We had to do far bit of climbing first before you get to it though. I pushed hard that heavy bike feeling the legs. Once on top I really enjoyed the downhill as I didn’t have any one in front of me and could really enjoy the trail bike and went full speed with no fear.

I was happy to finish at 6th place again in ladies and 42nd overall after stage 2.

After good shower and great healthy meal again we enjoyed the prize giving and almost felt sorry that this special and well organized race was over. Some went to the after party at Ginos but I had to hit back to Cape Town and spend some time with the husband.

Needless to say that 500Rand from each entry went to building new single tracks and to charities like Songo.info.

Well done to Stillwatersports and Specialized for organizing awesome race. Im sure it will become popular and a must do in future.