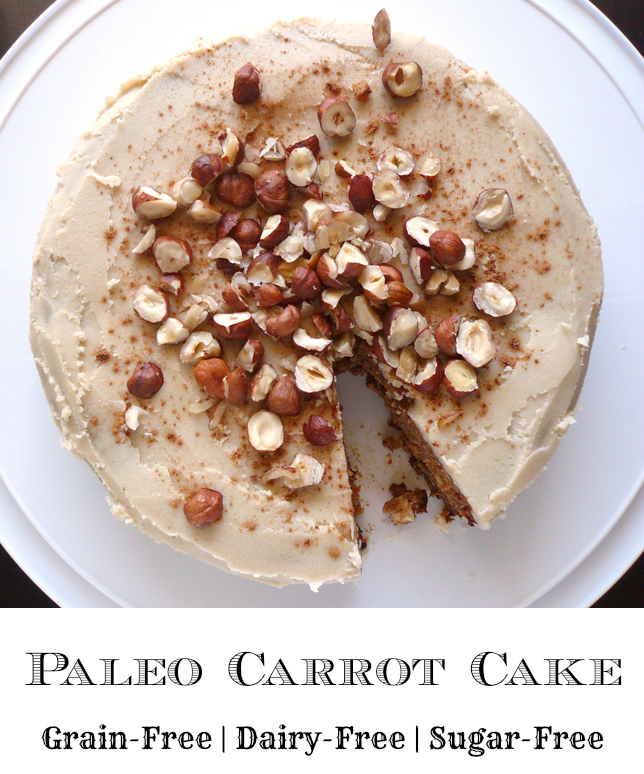 A naturally-sweetened cake packed with carrots, fruit and spices in a grain-free flour combination.

Instructions
Preheat oven to 350F. Grease an 8-inch round springform cake pan and set aside.
Peel carrots and roughly chop. Pulse in a food processor until finely shredded, transfer to a large mixing bowl.

Zest the entire orange over the carrot shreds.

Chop the dates, add to a small bowl. Squeeze the juice of the zested orange over the dates, make sure they’re completely submerged (you may need to pack them down into the juice!) then heat in a microwave on high for 60 seconds.

Roughly chop the apples and add to the food processor along with the dates and juice mixture and the raisins. Process until very finely chopped, then add to the carrot and zest mixture along with the eggs and olive oil and mix thoroughly.

Pour into greased pan, and bake in the oven for approximately 40 minutes. Remove when the top is brown and firm to the touch. Cool completely, then release from the springform.

Put all of the frosting ingredients in a blender. Blend for 30-45 seconds, until well-incorporated. Pour into a small bowl and chill for 1 hour, minimum. Remove from refrigerator and let come to room temperature.

Using the tip of a butter knife, carefully smear the icing over the top and sides of the cake. Top with cinnamon. 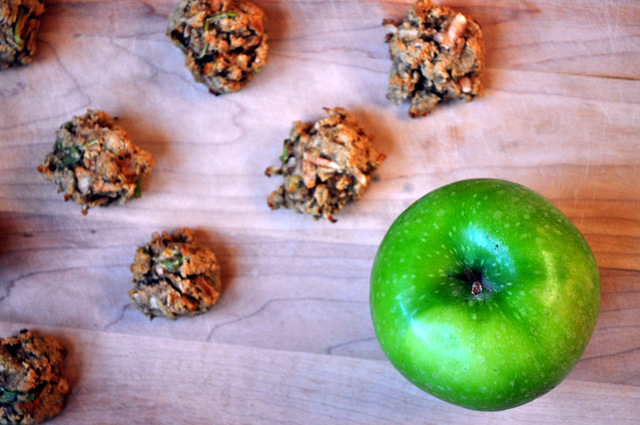 Line a baking sheet with parchment paper and set aside. Preheat oven to 350 degrees.

Mix all ingredients together in a medium bowl. Add a touch of honey if you prefer sweeter cookies.

Drop cookies by spoonful onto the parchment paper. Bake for 8 to 10 minutes, or until done to your liking.

Combine coconut flour, baking soda, salt, cinnamon, and nutmeg in a small bowl. Mix well and make a well in the center.

Add the almond extract, egg, almond milk, oil, and honey. Stir well with a fork, working out any lumps. Let rest for a couple of minutes to allow the coconut flour to absorb the liquid.

Spoon the batter onto a parchment lined baking sheet. Spread out the batter and mold into a 1/2 inch thick rectangle. Spread dried fruit/fruit onto the top of the shaped batter and top with another sprinkle of cinnamon.

Using the edge of the parchment paper, roll your fruit-topped shaped batter- like a cinnamon roll.

Bake your cinnamon roll for 20-25 minutes, or until the roll is golden brown.

Remove from oven and eat. Alternately, you could top with vegan frosting. 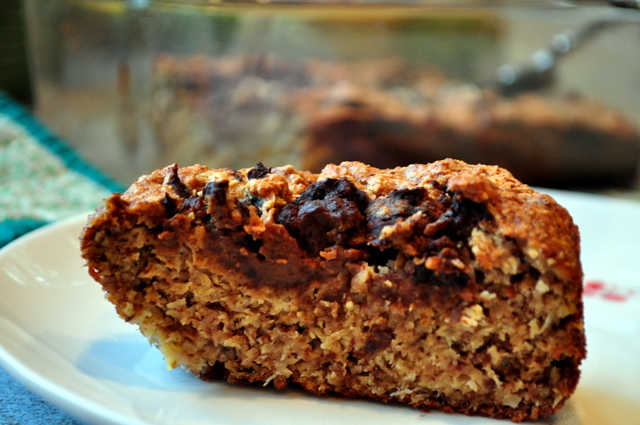 In a mixing bowl, combine all of the ingredients (reserve the pumpkin, cocoa powder, and honey). Mix, breaking up the banana so it is mostly incorporated into the batter (lower amounts of visible chunks). Pour the batter into a greased loaf pan.

In a separate bowl, stir together the pumpkin, cocoa powder, and honey. Pour this mixture down the center of the banana batter and use a knife or toothpick to slightly swirl it into the batter (left, right, zig-zag motions).

Bake for approximately 35-40 minutes, until the center is no longer gooey (soft). Let the banana bread cool before removing from the pan. 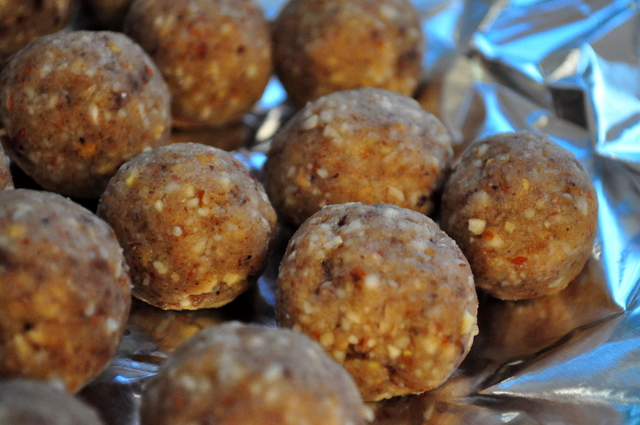 Add almonds and walnuts to a food processor and pulse until almost completely broken down. Add banana chips through cinnamon on the ingredient list and process again, making sure to stop and scrape sides, as needed. Continue to pulse the mixture until a batter starts to form. Add more honey or vanilla extract if “batter” isn’t quite sticking together.

Form into small balls and place in refrigerator or freezer for storage.

Before you start cutting carbs completely out of your diet as Tim Noakes suggests read this:

© 2005 Loren Cordain, PhD and Joe Friel, MS
The Paleo Diet for Athletes was released in October, 2005 from Rodale Press. Written by Loren Cordain, Ph.D., author of The Paleo Diet, and Joe Friel, M.S., author of numerous bestselling books on training for endurance athletes, the book applies the concept of eating as our Stone Age ancestors ate to the extraordinary demands of training for serious endurance sports. Although it is now the 21 st century, athletes still have Old Stone Age (Paleolithic) bodies. There has been no significant change in the human genome in the past 10,000 years. Physiologically speaking, we are still Paleolithic athletes.

The Paleo Diet
The basic premise of Dr. Cordain’s research on paleolithic nutrition is that certain foods are optimal for humans and others are nonoptimal. The optimal foods are those that we have been eating for most of our time on Earth—more than 4 million years. Only in the last 10,000 years, a mere blink of the eye relative to our species’ existence, have we been eating nonoptimal foods. Unfortunately, these foods comprise the bulk of what western society eats today and include such foods as grains, dairy and legumes. Given that our bodies have not changed, we are simply not welladapted to these nonoptimal foods and they moderate health and peak performance.On the other hand, we have been eating optimal foods – vegetables, fruits, and lean animal protein – for hundreds of thousands of years and we are fully adapted to them. Science tells us that these foods also best meet our nutritional needs. Eat these and you will thrive. Avoid or strictly limit them and your health and performance will be compromised.
Paleo for Athletes
Serious athletes, however, when it comes to immediately before, during, and directly after workouts, need to bend the rules of the Paleo Diet a bit since we’re placing demands on the body that were not normal for our Stone Age ancestors. Hour after hour of sustained high energy output and the need for quick recovery are the serious athlete’s unique demands. This requires some latitude to use nonoptimal foods on a limited basis. The exceptions may best be described by explaining the athlete’s 5 stages of daily eating relative to exercise.

Stage I: Eating Before Exercise
In brief, we recommend that athletes eat low to moderate glycemic index carbohydrates at least two hours prior to a hard or long workout or race. There may also be some fat and protein in this meal. All foods should be low in fiber. Take in 200 to 300 calories for every hour remaining until exercise begins. If eating two hours prior is not possible, then take in 200 or so calories 10 minutes before the workout or race begins.

Stage II: Eating During Exercise
During long or hard workouts and races you will need to take in high glycemic index carbohydrates mostly in the form of fluids. Sports drinks are fine for this. Find one that you like the taste of and will drink willingly. Realize that events lasting less than about an hour (including warmup) don’t require any carbohydrate. Water will suffice for these. A starting point for deciding how much to take in is 200 to 400 calories per hour modified according to body size, experience and the nature of the exercise (longer events require more calories than short).

Stage III: Eating Immediately After
In the first 30 minutes postworkout (but only after long and/or highly intense exercise) and postrace use a recovery drink that contains both carbohydrate and protein in a 4-5:1 ratio. You can buy a commercial product such as Ultrafit Recovery™ (www.ultrafit.com) for this. Or you can make your own by blending 16 ounces of fruit juice with a banana, 3 to 5 tablespoons of glucose (such as CarboPro) depending on body size, about 3 tablespoons of protein powder, especially from egg or whey sources and two pinches of salt. This 30minute window is critical for recovery. It should be your highest priority after a hard workout or race.

Stage IV: Eating for Extended Recovery
For the next few hours (as long as the preceding challenging exercise lasted) continue to focus your diet on carbohydrates, especially moderate to high glycemic load carbohydrates along with protein at a 4-5:1 carbprotein ratio. Now is the time to eat nonoptimal foods such as pasta, bread, bagels, rice, corn and other foods rich in glucose as they contribute to the necessary carbohydrate recovery process. Perhaps the perfect Stage IV foods are raisins, potatoes, sweet potatoes and yams.

Stage V: Eating for LongTerm
Recovery For the remainder of your day, or until your next Stage I, return to eating a Paleo Diet by focusing on optimal foods. For more information on the Paleo Diet go to www.thepaleodiet.com or read The Paleo Diet by Loren Cordain, Ph.D.

How Much Protein, Carbs and Fat Should I Eat?
The macronutrient requirement changes with the demands of the training season and so should be periodized along with training. We recommend that athletes maintain a rather consistent protein intake year round. As a percentage of total calories this will typically be in the range of 20-25% for athletes. This is on the low end of what our Stone Age ancestors ate due to the athlete’s increased intake of carbohydrate in Stages I to IV which dilutes protein as a percentage of daily calories.

On the other hand, periodization of diet produces significant and opposing swings in the athlete’s fat and carbohydrate intake as the training seasons change. During the base (general preparation) period the diet shifts toward an increased intake of fat while carbohydrate intake decreases. At this time in the season when a purpose of training is to promote the body’s use of fat for fuel, more healthy fat is consumed—in the range of 30% of total calories—with carbohydrate intake at around 50%. During the build and peak (specific preparation) periods the intensity of training increases placing greater demands on the body for carbohydrate to fuel exercise. At this latter time of the season Stages III and IV become increasingly critical to the athlete’s recovery. Carbohydrate intake increases accordingly to around 60% of total calories with fat intake dropping to around 20%. During times of the year when training is greatly reduced (peaking/tapering and transition periods) the athlete must limit caloric intake to prevent unwanted weight gain.

Why is the Paleo Diet Beneficial?
Health and fitness are not synonymous. Unfortunately, many athletes are fit but unhealthy. Frequent illness, injury and overtraining reduce performance potential. The Paleo Diet for Athletes significantly improves health long term. Compared with the commonly accepted athlete’s diet, the Paleo Diet:

Decreases omega-6: omega-3 ratio. Reduces tissue inflammations common to athletes while promoting healing. This may include asthmatic conditions common in athletes.
Lowers body acidity. Reduces the catabolic effect of acidosis on bone and muscle while stimulating muscle protein synthesis. This is increasingly important with aging.
Is high in trace nutrients. Vitamins and minerals are necessary for optimal health and longterm recovery from exercise. The most nutrient dense foods are vegetables and seafood. On average, vegetables have nearly twice the nutrient density of grains.

Excerpt from the Paleo Diet for Athletes
Training for endurance sports such as running, cycling, triathlon, rowing, swimming, and cross country skiing places great demands on the body, and the athlete is in some stage of recovery almost continuously during periods of heavy training. The keys to optimum recovery are sleep and diet. Even though we recommend that everyone eat a diet similar to what our Stone Age ancestors ate, we realize that nutritional concessions must be made for the athlete who is training at a high volume in the range of 10 to 35 or more hours per week of rigorous exercise. Rapid recovery is the biggest issue facing such an athlete. While it’s not impossible to recover from such training loads on a strict Paleo Diet, it is somewhat more difficult to recover quickly. By modifying the diet before, during, and immediately following challenging workouts, the Paleo Diet provides two benefits sought by all athletes: quick recovery for the next workout, and superior health for the rest of your life.

For more information on The Paleo Diet for Athletes go to…
www.thepaleodiet.com
www.trainingbible.com