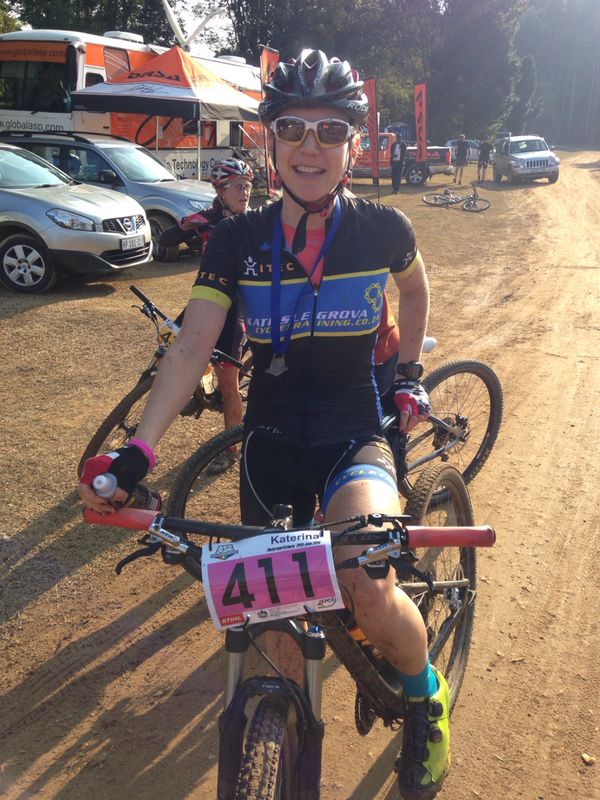 I have not planned to ride the Rainbow Challenge but my coach ( yes even coach has their own coach) talked me into it. I have taken 2 months after Epic of easier fun riding. So my form has not been on top form and also my love for chocolate had me bit heavier.

Anyway I got last minute of a month training with Garden Route 300 and the Greyton MTB race being part of my prep.We arrived nice and early on Wednesday already to get settled in Pietermaritzburg. On Thursday morning we couldn’t wait to hit the trails. Quickly I realized it wasn’t going to be easy race. Lots of steep climbs with lots of single track and tight switchbacks. We got in just about under 2 hours of practice and headed of to local Coffeeberry for breakfast.

Friday we planned to ride again on the course but we woke up to rain. Off we went to have proper breakfast at our hotel rather and waited. But lunch time still raining we decided to hit the Virgin Active rather and did an hour on the spin bike with few sprints to get the legs switched on for following days race. The gym was new with a view on Cascades and pleasant experience and probably safe bet opposing getting muddy on the trails.

The next morning it wasn’t raining luckily however the course would be muddy. My start was only at 9 30am so I had proper breakfast and try to keep calm. Which wasn’t easy with everyone walking around and saying how hard that course was. I thought come on how hard can it be? Surely its just one day on fresh legs and having done muddy Cape Pioneer Trek and Epic not much can surprise me now right?

There was about 40 of us on the start with about 10 ladies in each age group. Mine was 30 – 34 which is a strong field. I saw Delene var der Leek that I know from Pioneer.

Off we went and started climbing almost immediately. The strong ladies went ahead and that was last time I saw Dalene obviously in good form. I was glad we did bit of the route as it was probably about the first hour of the race. It took us an hour to do about 10km. Steep climbs and muddy slippery single track in beautiful green forest. I didn’t go all out as was warned to keep energy for last 20km. That saying I was still pushing hard. After about second hour we were out of the forest and did little bit of gravel road in bush where I expected elephants and rhino march pass me every second. The field split a lot by then I managed to pass few ladies from my age group and then I was riding alone mostly with one older lady around me for a bit. We climbed up again and rode on top of the hills where we got amazing views of the landscape. I was glad by then I came as this was great change of scenery from Western Cape. Coming back towards Cascades we were welcomed by more single track that was really awesome and had even dual track. By then we did 50km and I think everyone would have been happy if we went to the finish. Nonetheless we had still another 24km to go. Steep climb followed with tight switch backs that took some coordination by then. Then bit of gravel road where I could see the last water point and another girl ahead of me so I didn’t stop even though I didn’t have any water left. Stupid 🙂 Suddenly I shouted with pain as my legs went into cramp. Which was indication of them being tired. Anyway I pushed through and it went away. By then I had all my 6!!! gels and energy bar. So I threw a sachet of Rehydrate straight into my mouth which gave me last bit of energy and also helped with the cramps. Last bit of single track was bit of a pain as it was steep and slippery mud with rocks around and my energy levels were about done. I rode some keeping a momentum and speed and have to admit ran few down hills as one doesn’t have much control in the mud like that.

Last 5 kays was luckily ride able and I managed to get into the finish. People were right when they said it was tough route. I think not the typical marathon route where is mostly gravel road with some single track. This was hard technical single track with bit of gravel road. But no complaints I loved it and so did Jaroslav Kulhavy and Tereza Hurikova the next day and finishing 1st and 3rd with their advantage of having good technical skills.

The race was marked very well. The route was awesome as described above. Water points were ok. Its not Dryland great choice but fine. Overall great race and great experience to ride the XCMarathon World Championship. I finished 5th in my age group which was ok result considering not being in top form.